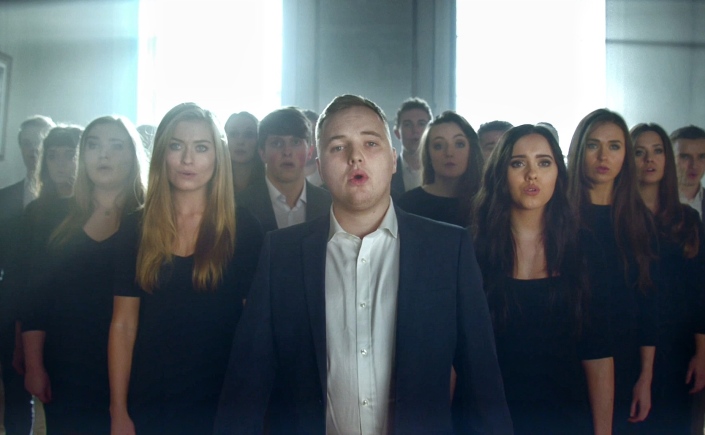 The song begins as the camera focuses on the face of the singer. A soft and confident tenor, he gently leans into a long-gone poet’s Gaelic verse. The camera pulls back to reveal a phalanx of young people behind him. They are dressed plainly. The lads in dark suits and open-neck, white shirts, and most sport five o’clock shadows. The lassies in dark dresses, blouses and pants. They join the soloist, quietly at first, but rising soon in unison. A bodhran kicks in, sharp and deliberate. The young folk stand still, yet their heads nod almost imperceptibly to the bodhran’s driving beat, and the song lifts off and soars. The camera pans across the choir, focusing on their faces, and particularly, their eyes – almost all of them clear and blue. The joy in the eyes, their smiles, and their voices is there for all to see and hear. Their voices rise, and then gradually fall, as if to glide to a gentle landing. The choir hums softly as the singer gently repeats the last line. Ó chuaigh i gcéin mo Ghile Mear – “since my darling went away”,  And it is done.

Mo Ghile Mear is a paradoxical, quixotic song that is at once romantic and political. If you have but a drop of Celtic blood in your veins or a rebel heart in your breast, you will fall under its spell.

Variously translated as “my gallant hero”, “my gallant star”, and “my dashing darling”, Mo Ghile Mear is a Jacobite love song that is as much about politics as about romance. Inspired as it was was by the Jacobite Rising against Protestant England’s rule in 1745, romance and politics do indeed unite in heroic, insurrectionary failure.

it was written in Gaelic by poet Seán Clárach Mac Domhnaill after the battle of Culloden which dashed for two and a half centuries the Scots’ dreams of independence. Composed in the convention of Aisling (Gaelic for “dream” or “vision”) poetry, it is a lament by the Gaelic goddess Éire for Bonnie Prince Charlie, Charles Stuart, the “Young Pretender” to the Protestant Hanoverian English throne that once belonged to the Roman Catholic Stuart clan, and who after the bloody failure of the ’45, fled into exile in France. And that’s where he remained, although his last resting place is in the crypt of Saint Peter’s Basilica in Rome – an ironic ending for this could’ve been champion of Catholic hopes.

Bonny Prince Charlie had many romantic and rousing songs written about him. But in reality he wasn’t the dashing, gallant leader that the songs portrayed and that the Scots and their Celtic Irish allies yearned for – most certainly not the Caesar of this song. He was an indecisive and vacillating leader, who thought himself much cleverer and popular than he actually was, and when the going got rough, he got going – and left the the Scots and Irish who supported him with blood and treasure to the tender mercies of the Sassenach foe.

And yet, the songs live on to this day, most notably in The Skye Boat Song, Will Ye No Come Back Again. The old and well-recorded favourite Óró sé do bheatha ‘bhaile has also been associated with the Jacobite cause as Séarlas Óg (“Young Charles” in Gaelic). The poet Padraig Pearse, leader of the doomed intifada we know as the Easter Rising of 1916, added new verses, and so the song entered the rebel canon.

Mo Ghile Mear differs from more conventional Aisling poems in which the poet is asleep or otherwise minding his own business when he experiences a dream or vision of a fair maid. In this cerebral wet dream, the poet personifies Éire – Ireland, the country itself – as a woman who once was a fair maiden but is now a widow. Her husband, the “Gallant” whatever is not dead but, but he is far away. As a consequence the land is failing and nature itself is in decline.

Popular since the 18th century, song has come to international attention in our own drear times – largely due to a host of recordings, and accompanying You Tube interest.

Iconic chanteuse Mary Black presents the song as a gentle, sad air. Sting famously recorded it with the renowned Celtic ensemble The Chieftains, and they give an understated and fair account of themselves, although the reinvented English lyrics turn “Our Hero” into a dashing cavalier”, swords and harps and all, far removed from original dream song. It is an easy song to overcook,  but Sting managed to resist the temptation. Not so that be-kilted posse Celtic Thunder who ramp up the Celtic bombast, reinventing the English lyrics as a curiously anachronistic, latter-day “rebel song” – “Hail the Hero”, the Battle Hymn of the Irish Republic, with a massive Irish flag waving o’er them all. What would The Minstrel Boy have thought about this?

Then there is the overreach of the much-loved and very popular, kitsch-laden, outings of Celtic Woman, invariably staged to maximum visual effect and capacity audiences at fantastically photogenic Irish castles. These handsome, well-dressed colleens do not crimp on the gowns, choirs, drums and bagpipes. Their Gaelic rewrite, transforms our “dashing darling” into a lovelorn mariner, replete with waves and tides, sails and sunsets. The ladies’ latest outing, with a relatively new lineup, sustains the razzmatazz with the eponymous “gallant star” resurrected as a martial beacon for “freedom’s sons”. It would seem that maritime motif of the girls’ original rendering was superfluous on an album that included My Heart Will Go On, from that damp, tear-jerking,   blockbuster, “Titanic”. Oh, Danny Boy, the pipes the pipes are calling!

That such liberties are taken with the lyrics is no big thing, however. Old Seán Clárach would probably agree that his original Aisling poem would be a wee bit archaic in this day and age, and that the undefeated despair, hope and longing of Éire’s dream were no longer relevant in a free, democratic and relatively prosperous (that is, post GFC) Ireland. He would no doubt have updated his verse, just as Padraig Pearse did with his song in 1916, substituting a 16th Century Irish pirate, the “great sea warrior” Gráinne Mhaol for the foreign born Charlie (so the ladies of Celtic Woman were not that far off-track with their nautical rewrite after all). But this mythologizing of Ireland’s heroes too often comes across as self-reverentially corny.

Cynics might blame the atmospheric, anthemic stadium rock of Bono and U2 for this commercialization of Irish music. Others blame Enya’s symphonic, new age outings once she put  behind her the Celtic mist and moodiness of her Clannad siblings. But I reckon that hitherto timeless, soulful and folksy Irish music has been like this since the Riverdance crew first stamped their collective hard shoes during the intermission of the Eurovision Song Contest and stole the show. But most Irish folk blame Michael Flatley, as the authoritative Waterford Whisperer made clear.

Meanwhile, in my opinion, the most sensitive, beautiful and indeed, rousing rendition of Mo Ghile Mear is the one described at the head of this post. No naff English lyrics are required. The original words of the Gaelic poem resonate powerfully through the hall.

It is sung by the Choral Scholars of University College, Dublin, an amateur, mostly acapella bunch of Irish students. These young folk formally audition for a scholarship with the ensemble. There is little glamour or artifice, no fireworks or vocal gymnastics. Plainly dressed, they look like folk you would pass on the streets of Dublin or Galway. Mark Waters, the portly lead singer would never get a gig in an Irish boy band, but wouldn’t look out of place in a church choir. The drama is achieved by inflection, modulation and tone, the lighting and way the choir is physically arranged in an eerily martial wedge, their only movement being that almost imperceptible nod of their heads in time with the lone bodran’s beat as the song builds momentum.

Listen, and listen again. It is a gem.

For more on Irish history and Irish songs if rebellion, see; The Boys of Wexford – memory and memoir, and: , Irish Rebel Music, and A Selection of songs of ’98.

And here are the Choral Students again: 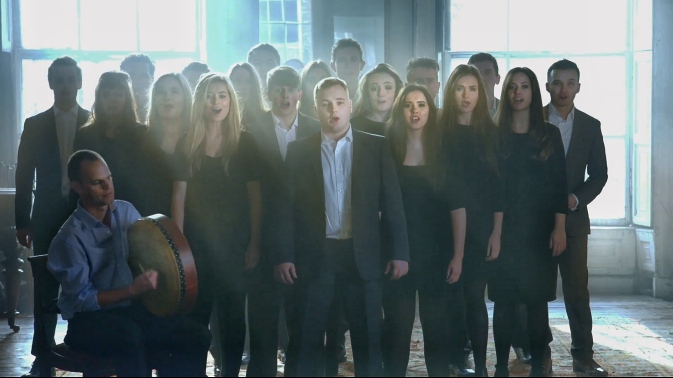 Here is  Brendan Graham’s achingly beautiful song Orphan Girl with the  Choral Scholars featuring  Abby Molloy. Sung from the perspective of one of Ireland’s famine orphans, on the eve of her inspection, which would decide whether she could travel to Australia, to escape the workhouse which had become her life.

And here are the recordings I referred to above. Enjoy.: