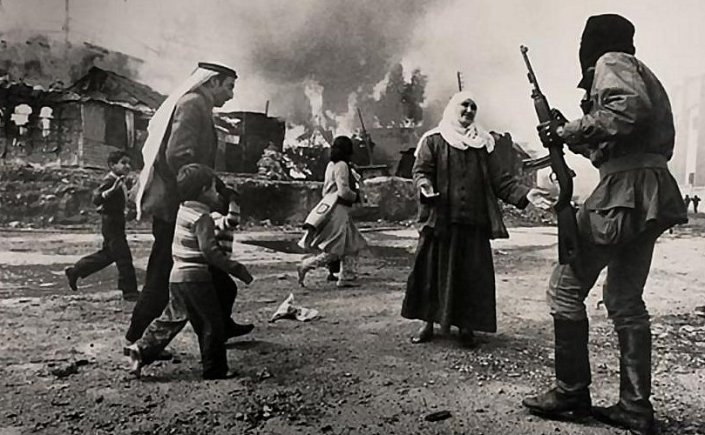 The Lebanese Civil War broke loose forty years ago this month. A cold war fuelled, by aggregating hostility between the Palestinian refugee community, a militarized state within a state, and their reluctant Lebanese hosts, became hot with deadly clashes between Palestinian and Maronite militias. Sects, clans, families, and the political parties and militias that gathered about them, went for their guns, the hounds of hell were loosed, and the massacres began.

In a Levantine echo of the Thirty Years War that raged through Western Europe from 1618, cities were destroyed and the countryside ravaged as armies, militias and gangsters fought over the fallen body of a divided and devastated land. Muslims fought Christians, Sunni fought Shi’a, Maronites fought Orthodox, Druze fought Muslims and Christians, communists fought nationalists, and Palestinians, at one time or other, fought everyone, including other Palestinians. And all changed partners and enemies in a bloody danse macabre that was at once mediaeval and mid-20th Century in its savagery.

This Hobbesian “war of all against all” drew in outsiders. Syrians, who during the course of their intervention, changed allies and adversaries as their political and strategic aims and interests mutated, and ruled the country until, implicated in the assassination of popular former prime Minister Rafik Hariri in 2005, beat an undignified retreat (whilst never quite relinquishing the levers of power). Israelis, threatened by guerrilla attacks in the Fatah land of southern Lebanon, ostensibly invaded Lebanon to destroy the Palestinian military machine, and as the midwife in the birth of the Shi’a Hezbollah, waded with eyes wide shut into a quagmire that many have viewed as their Vietnam. Americans and French, who intervened with the aim of separating the warring sides and pushing them towards a ceasefire, departed in the aftershock of Hezbollah bombs that killed hundreds of their servicemen. And United Nations Blue Berets who serve and die still in the hostile borderlands.

The war raged for the next fifteen years, staggering to an end in 1990 after claiming over 150,000 lives and destroying the lives of tens of thousands of others, including over 100,000 permanently handicapped. Nearly a million souls fled their homes, and some 76, 000 remain displaced to this day, now forgotten in the midst of the new and greater Syrian diaspora, whilst tens of thousands emigrated permanently. There are still some 17,000 “disappeared” who may be either still in Syrian or Lebanese jails, or more likely, in one of hundreds of unmarked graves scattered across this tiny country.

There are no memorials, no cenotaphs, no national commission to trace the missing, and no Madiba to gather and reconcile the sundered tribes. Just memories of what those who endured call “the events”, and for some, a selective amnesia. A harrowing half-life endures, sleeping embers constantly being fanned to life by the ill winds that blow across the porous frontier with Syria and the iron curtain that separates Hezbollah from Israel. It said that old wars beget future wars. And in no land can this be more of a self-fulfilling prophecy if the Gods Of War have their way.

As well they might as the legacy lives on in the rise and rise of Hezbollah, a non-state that is stronger than the state. In the use of car bombs, suicide bombers, foreign hostages, and human shields as canny weapons in what we now call asymmetrical urban warfare. In the destruction of the Palestinians’ once formidable military muscle, now quarantined in the Gaza ghetto and the impotent Palestinian Authority. In remembrance of the massacres of Sabra and Shatilla that still haunt Israeli and Palestinian dreams, when Yasser Arafat decamped for Libya with his army and left his people at the mercy of the Phalange militia. The Palestinians are still in Lebanon, still yearning for their terra irredenta in the south.

And in Lebanon redux, some say the old hatreds linger still and could rekindle the fires of war. Others hope that a younger generation do not take the road to perdition travelled by their elders. Armed young men in Sunni Tripoli and in Beirut’s Shi’a suburbs, and fighting in Syria may disagree. Calmer countries chart their fortunes with the rise and fall of their financial indices, whilst Lebanese can check the political weather by watching the market price of hand-guns and Kalashnikovs. They may have buried the hatchets, but many know where they are buried.

The roots and fruits of the Lebanese civil war are myriad and complex. The redoubtable journalist Robert Fisk unravels them best in his tombstone of book, Pity The Nation. Read it and weep. For it is a bloody saga of trial and treachery, of enmity and endurance, of courage and cravenness, but most of all, of infinite sadness. And none more so than when he writes of a Lebanese doctor, Amal Shamaa: “I had to take the babies and put them in buckets of water to put out the flames. When I took them out half an hour after, they were still burning. Even in the mortuary, they smouldered for hours”. “Next morning”, Fisk continues, “Amal Shamaa took the tiny corpses out of the mortuary for burial. To her horror, they again burst into flames”. Such is the effect of phosphorous shells on mortal flesh.

The title of Fisk’s book is that of a poem written in 1931 by Khalil Gibran, Lebanon’s most celebrated poet, a poem that was both a prophetic testament and a testimony of times to come: “Pity the nation divided into fragments, each fragment deeming itself a nation”.

Pity the nation that acclaims the bully as hero,
and that deems the glittering conqueror bountiful.

Pity a nation that despises a passion in its dream,
yet submits in its awakening.

Pity the nation that raises not its voice
save when it walks in a funeral,
boasts not except among its ruins,
and will rebel not save when its neck is laid
between the sword and the block.

Pity the nation whose statesman is a fox,
whose philosopher is a juggler,
and whose art is the art of patching and mimicking

Pity the nation whose sages are dumb with years
and whose strongmen are yet in the cradle.

Pity the nation divided into fragments,
each fragment deeming itself a nation.

Kahlil Gibran, The Garden of The Prophet (1933) 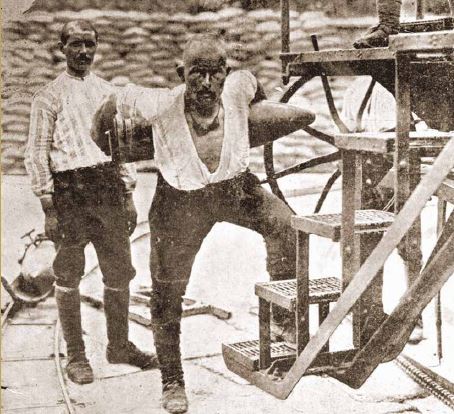 A song about Gallipoli, sung by a Turkish soldier

Back in the last century, before ANZAC Day became the secular Christmas that it has become, before marketing people and populist politicians saw its commercial and political potential, before the fatal shore became a crowded place of annual pilgrimage, my Turkish friend, the late Naim Mehmet Turfan, gave me a grainy picture of a Turkish soldier at Gelibolu carrying a large howitzer shell on his back. Then there was this great film by Australian director Peter Weir, starring young Mel Gibson and Mark Lee. There were these images of small boats approaching a dark and alien shore, of Lighthorsemen sadly farewelling their Walers as they embarked as infantry, and of the doomed Colonel Barton humming along to a gramophone recording of Bizet’s beautiful duet from The Pearl Fishers, ‘Au fond du temple saint’ before joining his men in the forlorn hope of The Nek.

There were other melodies I could never quite get out of my head. One I first heard in a musical in Beirut before that magical city entered its Dark Ages  –  Al Mahatta, written by the famous Rabbani Brothers and starring the Lebanese diva Fayrouz. And The Foggy Dew, one of the most lyrical and poignant of the Irish rebel songs:

Right proudly high over Dublin town, they hung out the flag of war. ‘Twas better to die ‘neath that Irish sky than at Suvla or at Sud el Bar…Twas England bade our Wild Geese go that small nations might be free,  But their lonely graves are by Suvla’s waves or the fringe of the grey North Sea.

The song grew out of these many inspirations.

It was first performed in public by HuldreFolk in the closing concert of Coffs Harbour Folk Festival at the RSL on Australia Day 1984. When we had finished, there was absolutely silence in the hall. Then a voice cried out “the sky didn’t fall down!”, and the hall erupted with applause.

Some Notes on Gallipoli and the Anzacs for readers unfamiliar with the history.

Monday 25th April is Australia and New Zealand’s national day of remembrance for all Anzac solders killed and wounded in their nation’s wars, and to honour servicemen and women past and present. At first, the Anzacs fought in the British Empire’s Wars, beginning with the Boer War, and then through two World Wars. From the mid -twentieth century, they have fought and died in what could ostensibly be called America’s wars even though these were waged under UN, EU or western alliance auspices: Korea, Gulf Wars II and III, Afghanistan, and the current interventions in Syria and Iraq. Incidentally, Australian veterans are presently commanding mercenary forces hired by the Gulf coalition that is laying waste to towns and villages in Yemen (with the help of American and British weaponry).

At the heart of the Anzac Day remembrance is the Australian and New Zealand Army Corps’ role the Dardanelles campaign of 1915-16, Winston Churchill’s grandiose and ill-conceived plan to take the Ottoman Empire out of the war by seizing the strategic strait between the Black Sea and the Mediterranean, thereby threatening Istanbul, the Ottoman capital. It was a military failure. From the initial seaborne assault to the evacuation, it lasted eight months and cost 114,000 lives with 230,000 wounded.

Gallipoli is cited as the crucible of Australian nationhood, but the Anzacs’ part in the doomed campaign was but a sideshow of the wider campaign. Although it is celebrated in Australian song and story, it was the Ottomans’ most significant victory in the war that was to destroy the seven hundred year old Ottoman Empire secure the reputation of its most successful general Mustafa Kemal, who as Ataturk, became the founder of modern Turkey.

Some thirty four thousand British soldiers died on the peninsula, including 3,400 Irishmen, and ten thousand Frenchmen – many of these latter being “colonial” troops from West and North Africa. Australia lost near on ten thousand and NZ three. Some 1,400 Indian soldiers perished for the King Emperor. Fifty seven thousand allied soldiers died, and seventy five thousand were wounded. The Ottoman army lost fifty seven thousand men, and one hundred and seven thousand were wounded (although these figures are probably much higher). An overlooked fact is that some two thirds of the “Turkish” solders in Kemal’s division were actually Arabs from present day Syrian and Palestine. Gallipoli was indeed a multicultural microcosm of a world at war.

Whilst the flower of antipodean youth is said to have perished on Gallipoli’s fatal shore, this was just the overture. Anzac troops were despatched to the Western Front, and between 1919 and 1918, 45,000 Aussies died there and 124,000 were wounded.

There are abundant primary and secondary sources relating to the Dardanelles campaign and the Anzacs, but here is a wiki primer: Gallipoli Campaign

And here is HukdreFolk’s rendering of Russian poet Yevtushenko’s account of the parade of German prisoners of war through the streets of Moscow in 1941, juxtaposed with The Watchers of the Water.

What passing-bells for these who die as cattle?
Only the monstrous anger of the guns.
Only the stuttering rifles’ rapid rattle
Can patter out their hasty orisons.
No mockeries now for them; no prayers nor bells;
Nor any voice of mourning save the choirs,—
The shrill, demented choirs of wailing shells;
And bugles calling for them from sad shires.

What candles may be held to speed them all?
Not in the hands of boys, but in their eyes
Shall shine the holy glimmers of goodbyes.
The pallor of girls’ brows shall be their pall;
Their flowers the tenderness of patient minds,
And each slow dusk a drawing-down of blinds.