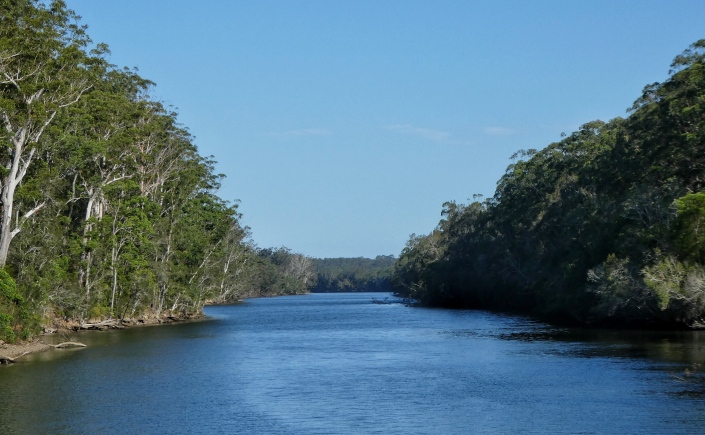 In days gone by, the journey from Bellingen and Coffs Harbour to the south side of Kalang River, and thence to Kempsey, Taree and Sydney, was a torturous one. The crossing had to be made by a slow and ponderous  ferry. It is remembered today by the existence of Old Punt Road, on the right hand side of Giinagay Way in the seaside town of Urunga on the Mid North Coast of New South Wales – if you are heading south from Coffs Harbour, it is on the right hand side just before the present day Kalang Bridge.

We republish here the story of the old punt and the construction of the first bridge over the Kalang (since replaced by the steel meccano bridge we see today) as retold in the now dearly departed Bellingen Courier Sun.

But first, a tale of the South Arm in the days of the Shire’s early settlement:

Europeans entered what was to become Bellingen Shire in 1840 when stock-man William Miles led a party into the Bellinger Valley to ascertain the abundance of much prized, avidly sought (and rapidly depleted) Red Cedar in the area. They came on foot, all the way from Kempsey – a trek of some one hundred kilometres through virgin bush. Such was abundance of the “red gold” that Macleay Valley government surveyor Clement Hodgkinson financed and supplied Miles to take him there the following year to see for himself. Arriving at the estuary of a large river, they headed west along that very ridge walked by the Gumbaynggirr for untold centuries.  Following a stream that descended southwards from the ridge, they encountered another large river that the Gumbaynggirr called the Odalberrie …

… Further exploration revealed that the Odalberrie was the southern arm of this larger river, named the Bellinger – derived from the Gumbaynggirr name for the spotted quoll, a totemic and now endangered marsupial. It’s southern sister was unimaginatively christened The South Arm

Back in the day, there was no road along the northern bank of The South Arm. Access to the farms that were established along the river was by small jetties. Farmers and their families would travel by boat to visit the estuarine port of Urunga and to visit each other. In the late 19th century, Moses Lacey, the first selector, ran a store on the rive bank …

Whilst the river became the Kalang, after the Gumbaynggirri “galanga” – the native tree known as white beech, now uncommon although we have reintroduced scores of them on our property – the road kept its name.

From Small Stories – the Schools of the Tarkeeth

For other tales of Bellingen Shire in In That Howling Infinite, see: Small Stories – A Tale of Twin Pines and Dark Deeds in a Sunny Land – a poet’s memorial to a forgotten crime 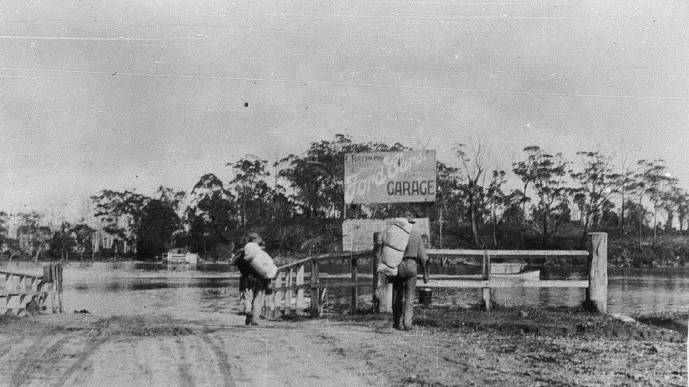 Travelling by foot in Olden Days.

As you travel at 110kms along the new Urunga bypass, spare a thought for the travellers of bygone years, because in 1888 it was a much slower journey.

At this time there were only three ferries available for crossing the Bellinger River’s North and South arm (now called the Kalang River). One was at Fernmount, one at Raleigh and one at Urunga (the South Arm), the latter being on the mail route to the Macleay and had the greatest amount of traffic 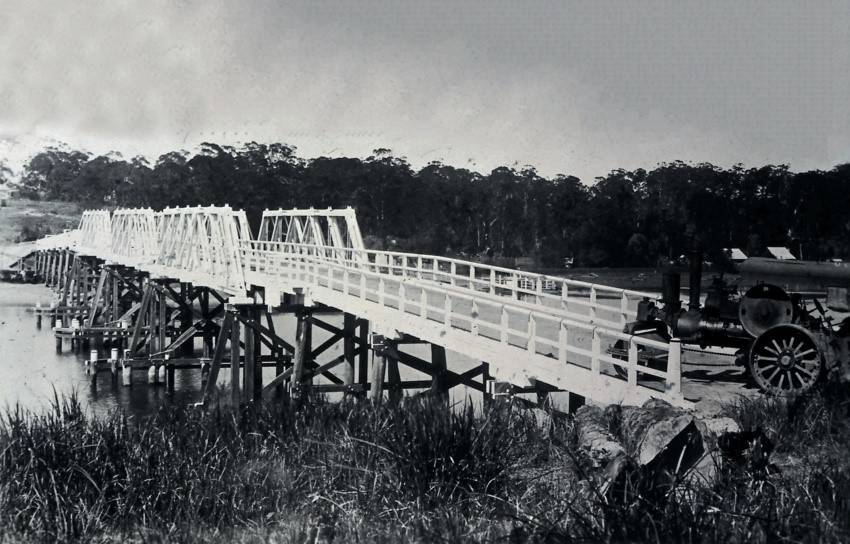 The new bridge blocked by asteamroller until the Official Opening Party arrive.

By 1911 tempers were on the rise about the ferry service and a meeting was called on the 31st March 1911 at the Urunga Hotel with the Minister for Works (Mr Griffith) and a deputation of residents, to discuss the problems associated with the ferry crossings.

The Minister was presented with a signed petition asking the Minister for an oil launch to be put on the ferries at South Arm and Raleigh.  Mr Arnold, a spokesman for the community, pointed out that “great inconvenience and delay were caused through the slowness of the ferries”[i]

By 1925 the members of the Bellingen Chamber of Commerce are wholeheartedly behind the Urunga Progress Association in the endeavour to secure a bridge over the South Arm. Mr W J Hammond (President of the Bellingen Chamber of Commerce) said that for 30 years, to his knowledge, the agitation had been going on.  He said “the present punt service was a disgrace, it was antediluvian and shocking inconvenience was occasioned to persons who were obliged to use the road”[ii] He instanced one delay recently when a doctor, hurrying to an urgent call from the other side of the river, was held up from 5am till 1pm through a breakdown of the punt. 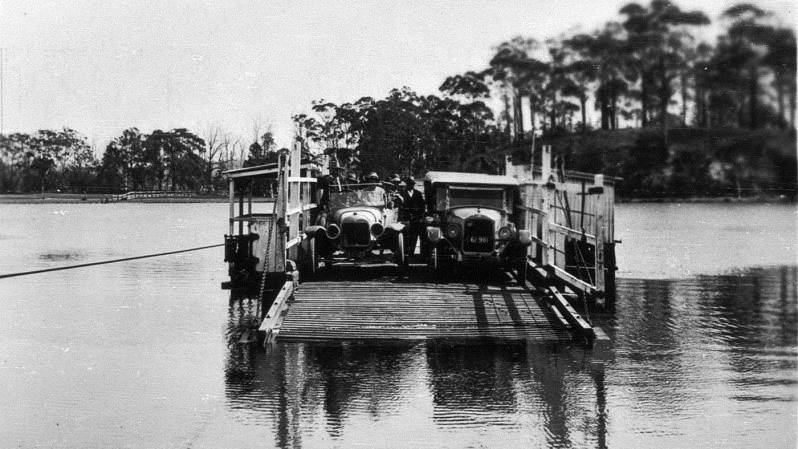 Travelling by car in days gone by.

The Engineer (Mr Baird) broke the ribbon at the entrance and drove his car over the bridge.  He had with him Mrs Gale (wife of the Bellingen Shire President) and Mesdames Atherton and Bushell, two of the oldest residents of the Bellinger.  It was noted that the ceremonies were not elaborate, as the Shire Clerk, Mr Witt put it “it was a case of no champagne by request as the Council is rather hard up at present”.

The Raleigh Sun reported on the 2 October 1928 that the opening was an important Milestone in the progress of the district. Mr Gale (the Shire President), in a fine speech, expressed the wish that it would not be long before another bridge at Raleigh would be on its way and that, with the bridges to be built over the Nambucca at Macksville and over the Clarence at Grafton, there would be no more punts to cross for hundreds of miles along the main North Coast road.[iii]

The bridge transformed the trip in 1928 but was eventually replaced by a new bridge in March 1972 at a cost $1.13 million.

The Minister of highways, the Hon P Morton, in his opening address, said that the new bridge was an example of the recent trend to avoid visual pollution. He added that this was as it should be in conformity with the beautiful district and a shire which was full of contrasts of scenery, which made it a delightful mecca for the tourist.