In the wake of controversial production of Shakespeare’s play in New York’s Central Park,  here is an excellent exposition of the politics of this play by American screenwriter, novelist and producer Joseph Suglia. One forgets just how politically sophisticated and daring William Shakespeare was – potentially dangerous and, indeed, deadly during the unsettled and bloody times of the Tudor monarchs. 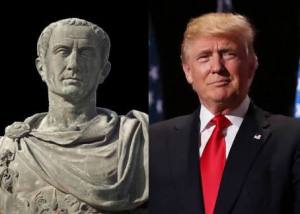 The election of Donald Trump to the presidency of the United States of America gives further evidence, if needed, that Americans wish to be led by cartoon characters.  It was not Trump the human being who acceded to the presidency.  It was his screen double, which is all the American electorate has ever known of him.  It was Trump the Rich Man of Home Alone 2: Lost in New York (1992).  It was Trump the Boss of The Apprentice (2004-2015).  It was Trump the Billionaire of Wrestlemania 23 (2007).  Donald Trump is every bit as unreal as Flo the Progressive Insurance Girl or Colonel Sanders—all three of these characters are strategic unrealities.  All are holograms, shadows of living beings rather than living…

One thought on “The politics of Shakespeare’s Julius Caesar”