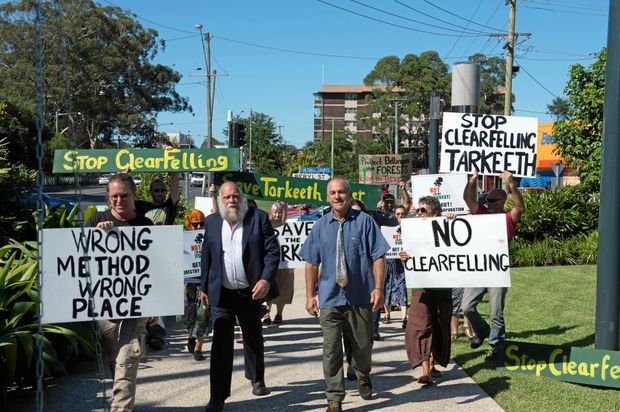 People crushed by laws, have no hope but to evade power. If the laws are their enemies, they will be enemies to the law.  Edmund Burke

The protest against the aggressive and toxic nature of Forestry Corporation’s clearfell, burn and poison forestry operation at Tarkeeth State Forest has been ongoing for over a year. The protest campaign kicked off in March 2016 with meetings and rallies, followed by the establishment of a protest camp in June, and direct action by forest protectors in July.

In January 2017, the Tarkeeth Three, Peter “Simmo” Simmonds, John “Sean” May, and Amber “AJ” Daley were convicted at Coffs Harbour Courthouse for their direct actions to protect The Tarkeeth. Sean and AJ appealed their convictions, and these were quashed in March. Simmo, a dedicated and veteran environmentalist, did not appeal his conviction because he had breached an earlier bond in relation to his direct action against coal seam gas operations at Narrabri, when he locked on at Tarkeeth. Thus did the Tarkeeth Three become the Tarkeeth Two. Simmo has since been acquitted of breaching the Narrabri bond.

As forest protector and protest leader Susan Weil said after the January trial, the outcome of the court proceedings:“allows people around Australia to not panic, and to not be scared to go out and protest for the environmental issues and social issues that matter to them”.

The following article features two interviews broadcast by Bellingen’s community radio 2bbb, with respect to these direct forest actions and the subsequent court proceedings. There are also live videos of the locks-ons, and links to media coverage.

Bellingen barrister John Carty, Counsel for the appellants, talked with 2bbb radio host Leo Bradney-George about the trial of the Tarkeeth Three, and particularly, the acquittal of the Tarkeeth Two at Coffs Harbour Courthouse on 2nd March 2017.
John Carty explains how Forestry Corporation had acted in a “disingenuous and opportunist” manner.

Prior to the Tarkeeth Three trial on 18th January 2017, forest protector Sean talked with 2bbb radio host Leo Bradney-George about Tarkeeth Forest and its defenders.

Protest leader Susan Weil’s live coverage of the Not In My Forest action group’s onsite protest at Tarkeeth State Forest on 28th July 2016, where Sean and AJ locked on to a timber harvester machine:

A short video of the destructive clearfell and burn forestry operations that inspired the Tarkeeth Three to direct action:

A selection of local media coverage of the Tarkeeth Three: