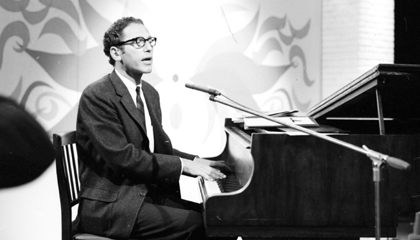 Years ago, American humorist Tom Lehrer was said to quip: “Political satire became obsolete when Henry Kissinger was awarded the Nobel Peace Prize”. This is most probably apocryphal. But as contemporary American politics (and our own, to a lesser degree) increasingly resembles a political satire, Lehrer’s back catalogue is welcome light relief.

Lehrer is ninety years of age this week. It is sixty years since the release of An Evening Wasted With Tom Lehrer, the first of his three live albums. This one-time mathematician at the Los Alamos nuclear laboratory, was, for a few short years, a concert performer. In his own words:  I’m sure you’ll all agree without hesitation that Tom Lehrer is the most brilliant creative genius that America has produced in almost 20 years  (and this was forty years ago). But for two years in the United States Army, he was a teacher of mathematics, and indeed until the 21st Century,  taught at UC Santa Cruz. Here is an excellent summation of his career: https://www.nature.com/articles/d41586-018-03922-x

For sixty years, Tom Lehrer has had an enduring influence. There were other musical comedians of similar sardonic and satirical mien, Victor Borge and Alan Sherman, for example, but none had Tom Lehrer’s infectious, eternally youthful appeal.

The United States was a culture on the cusp of change. The country still enjoyed postwar economic prosperity. The Cold War, with all its fears and uncertainties, with its sanction of mutually assured destruction , with its chosen enemies and innate hypocrisies, where any dictator opposed to the Soviets was a friend of the “free west” (now there’s a phrase we haven’t heard for years!), had been simmering for over fifteen years with no conclusion in sight. Americans (or more specifically, the Marines and the CIA) were the “cops of the world”. Kennedy had been assassinated, sending shock waves through the American psyche. Thanks to that same JFK, the United States was wading well into the morass that would become Vietnam. Knee deep in the big muddy as Pete Seeger was to put it. Rock ‘n’ Roll and “Popular” Music were elbowing out the crooners. No protest, no rebellion, no drugs (well, not that sort), no race riots (a bit of trouble in Alabama, but), no positive discrimination, no ride-by-shootings, no premarital sex (as far as decent people were concerned, and besides, good girls didn’t), no AIDS, no faxes, no mobile phones, no personal computers, no Internet. And America was relaxed and comfortable.

England, where I was born and grew up, was much the same. The postwar austerity had given way to a new found prosperity and national self-confidence. Working class kids had brass in their pockets and smart clothes. More of these (the kids, that is) were getting an education, and were gate-crashing the cultural establishment. The “Angry Young Men” were breaking down all sorts of barriers with their iconoclasm. And the pop music of America provided anthems for youth to live by.

Robert Zimmerman still lived with his folks back in Hibbing, Minnesota, and the Silver Beetles had yet to play in Hamburg. The times were not a changing just yet.

I can remember the ‘sixties, and I was there! What I can’t remember is listening to Tom Lehrer. That pleasure had to wait until the early ‘eighties when my friend and partner in artistic crime, Yuri the Storyteller,  sat me down to listen to The Man. But I do remember the times which created Tom Lehrer, and to listen to his songs and the soliloquies that accompanied them on his live recordings, is to be put aboard a Tardis and sent back to those days.

For Lehrer was a product of his times and his class: the liberal, pinkish intelligentsia that constituted America’s cultural elite. Harvard, Yale, ivy covered professors in ivy covered halls, as Lehrer put it. His audience was an educated and erudite mob, well read, with a wide vocabulary. They understood Lehrer’s jokes and puns and his witty double entendres. They appreciated his droll delivery and his often risque sense of humour. He was theirs’ and they were his. Shared experiences, shared schools, shared professions, shared pastimes, shared politics, and shared prejudices.

There was also a shared condescension to the less cerebrally endowed (or, as we would put it nowadays in the declining years of political correctness, the more intellectually challenged): Rock-n-roll and other children’s records…and: the usual jokes about the army aside, one of the very fine things one has to admit is the way the army has carried out the American democratic ideal to its logical conclusion in the sense that not only do they prohibit discrimination on  the grounds of race,creed, and colour, but also on the grounds of ability.

So, Life is like a sewer: what you get out of it depends on what you put in.

Lehrer flirted with the big issues of the day.

Race:  “I Wanna Go Back To Dixie”. I wanna talk to Southern gentlemen and put my white sheet on again, I ain’t seen one good lynchin’ for years. “National Brotherhood Week”.I’m sure we all agree that we ought to love one another, and I know there are people in the world that do not love their fellow human beings, and I hate people like that.

Nukes: “We Will All Go Together When We Go”. Down by the old maelstrom, there’ll be a a storm before the calm. “MLF Lullaby”, and “Werner Von Braun”. Don’t say that he’s hypocritical, say rather that he’s apolitical.”Once the rockets go up, who cares where they come down”.

Environment: “Pollution”. Wear a gas mask and a veil. Then you can breathe, long as you don’t inhale (where have I heard that before?).

America’s place in the world: “Send the Marines”. They’ve got to be protected, all their rights respected, ’til somebody we like gets elected.

He sparred affectionately with time-honoured American icons: “Be Prepared”, “Fight Fiercely, Harvard”, The Hunting Song”, “The Wild West Is Where I Want To be”, “It Makes A Fellow Proud To Be A Soldier”. He put culture and those with pretensions to it under a spotlight whilst pushing the boundaries of morality and taste: “Oedipus Rex”, “Masochism Tango”, (the singer exhorts his partner to haunt him and taunt him and, if at all possible, to consume him with a kiss of fire),”I Hold Your Hand In Mine”, “The Old Dope Pedlar”, “Smut”. He poked fun at the nostalgia of the popular music of his day: “She’s My Girl”, “When You Are Old and Grey”. “Bright College Days”, “My Home Town”, “A Christmas Carol”.

He took a swipe at the nascent folk song revival, the particularly fashionable form of idiocy among the self-styled intellectual: “Clementine”, “The Irish Ballad”, “The Folk Song Army”….the theory I have held for some time to the effect that the reason most folk songs are so atrocious is that they were written by the people. And at times, he verged on the manic in a manner that was almost Pythonesque: “Poisoning Pigeons in the Park”, and “Old Mexico”. I hadn’t has so much fun since the day my brother’s dog Rover got run over.  And like Python, rather daring and yet safe at the same.

I know it’s very bad form to quote one’s own reviews, but there is something the New York Times said about me [in 1958], that I have always treasured: ‘Mr. Lehrer’s muse [is] not fettered by such inhibiting factors as taste.

Lehrer has said of his musical career, If, after hearing my songs, just one human being is inspired to say something nasty to a friend, or perhaps to strike a loved one, it will all have been worth the while.

So, I’d like to take you now on wings of song as it were, and try and help you forget perhaps for a while your drab, wretched lives. Without further ado, here is a selection of Tom Lehrer sites:

First of all, by way of an entree, there’s The Tom Lehrer Home Page, and wikipedia. Very highly recommended for main course is Jeremy Mazner’s excellent paper, “Tom Lehrer: The Political Musician That Wasn’t“, a detailed analysis of Lehrer’s life, times and music. And for dessert, Paul Lehrman’s conversation with Tom Lehrer, taped in September 1997. Finally, with the coffee and a brandy, the songs of Tom Lehrer, together with the introductions that were often as memorable as the songs themselves.  From our own Sydeney Morning Herald, “Stop Clapping – This is Serious“. And in this US Election year, a recent appraisal of  Leherer as a political satirist from AV Club.

And here are a few samples of the wit and wonder of Tom Lehrer:

I Wanna Go Back to Dixie

9 thoughts on “Looking for Lehrer”