In memory of Khaled Muhammed al Asaad, murdered by ISIS in August 2015, and of Palmyra, the ‘Pearl of the Desert’.

The past is manifest in stone, in Ruins and Bones  © Paul Hemphill 2014.

These are lands of testament and prophecy, of sacrifice and sacrament, of seers and sages, of vision and vicissitude, of warriors and holy men. The spiritual and the temporal have melded here for millennia. We see still the remnants of ancient empires and the echoes of their faiths. We chart their decline and fall in the fortunes of their monuments and their mausoleums, in the “tumbled towers and fallen stones, broken statues, empty tombs” where “ghosts of commoners and kings walk the walls and catacombs of the castles and the shrines”.

The cloud-capp’d tow’rs, the gorgeous palaces,
The solemn temples, the great globe itself,
Yea, all which it inherit, shall dissolve.
Shakespeare, The Tempest, Act 4 Scene 1

Nothing beside remains. Round the decay
Of that colossal wreck, boundless and bare,
The lone and level sands stretch far away.
Percy Bysshe Shelley, Ozymandias

Read also, The Rubble Of Palmyra by Leon Wieseltier, published in The Atlantic, 5th September, 2014 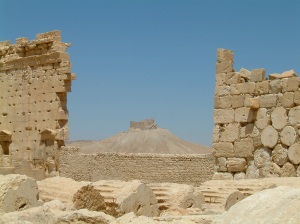 2 thoughts on “Ruins and Bones”