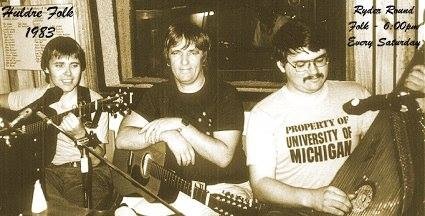 My old friend and Huldrefolk member, George Hofsteters, aka Yuri The Storyteller, passed away peacefully in his sleep yesterday morning. Passing strangest is Yuri’s passing. He had such a life force. he was a force of nature, even, the kind of person you’d think would outlive us all. And it was ironic that he who raged so long against the establishment should go so quietly into the night. I would have expected a contrarian like Yuri to have been lynched by a mob of irate god-botherers.

Yuri’s departure brought me back to the dying decades of the last century, when the shadowy and iconoclastic HuldreFolk appeared out of nowhere with their unique combination of stories and songs, and then almost as suddenly, disappeared into the mists of memory.

I was playing at the celebrated Three Weeds Folk Club in Rozelle in the spring of 1983, performing a cover of Meniscus Diabetes’ song ‘Roman Holiday’. I was distracted by a cackling in the front row; and there was Yuri, laughing his head off. After my set, we got together and swapped notes on life, the universe and everything. Fate would have it that celebrated bandurist Victor Mishalow was also on the bill that night. And Yuri and I were enthralled by the magic of the Carlingford Cossack’s grand instrument.

Yuri told us he was a Russian Storyteller, and that he was performing at the Humanist Society the following Tuesday. “Come along and play some songs and tunes”, he said. And so we did. Yuri enthralled us with his spirited rendering of Alfred Noyes’ “The Highwayman”. And it was there, in Shepherd Street, Surrey Hills, that HuldreFolk was born. Over the next two years, HuldreFolk, named for the mythical and mystical ‘hidden people’ of Icelandic legend, played throughout Australia.

One such occasion was the very first time I visited Coffs Harbour, a seaside graveyard with lights on the mid north holiday coast of New South Wales, sometimes known as the Costa Geriatrica (as fate would have it, we now live in the forest some forty clicks away from there). Looking fir a parking space outside the venue, Yuri cut into a space ahead of a car that had already bagged that spot. A few minutes later, the occupants of the car approached us, looking mean and moody. Tall, broad and hairy, they looked like bad news. Yuri was unperturbed. “My mate Paul is a black belt in karate”, he chirped…

So Yuri! He could be a proper bastard sometimes.

Although the HuldreFolk pursued their own paths and projects, during the following decades, they would pop up in unexpected places, like their namesakes, in ones, twos, threes, and on occasions with guest HuldreFolkies. Their last outing as a trio was in October 2007 at the North By Northwest Poetry And Folk Club.

Whenever they worked together, their collaborations were creative and at times, crazy. Listen to Victor’s haunting bandura arrangements behind many of Yuri’s stories, the bravado of ‘The Ballad of Boreslav’ and the wackiness of ‘The Song Of The Volga Shearers’. Back in the day when I was performing ‘I Still Call Mongolia Home’, ‘Brave Goliath’, and ‘Roman Holiday’, Yuri would say: “There has never been as song about the Spanish Inquisition. Why don’t you write one”. Or, “How about a song about the Vikings?” The rest, of course, is hysterical.

We would always introduce George as “The One And Only Yuri The Storyteller”. Watch him on You Tube reciting the epical ‘McArthur’s Fart’ or the poignant ‘Claudy’, and telling the magical story of ‘The Algonquin Cinderella’ or the faerie ‘Green Lady’, and you will see that he really was.

4 thoughts on “Yuri The Storyteller”