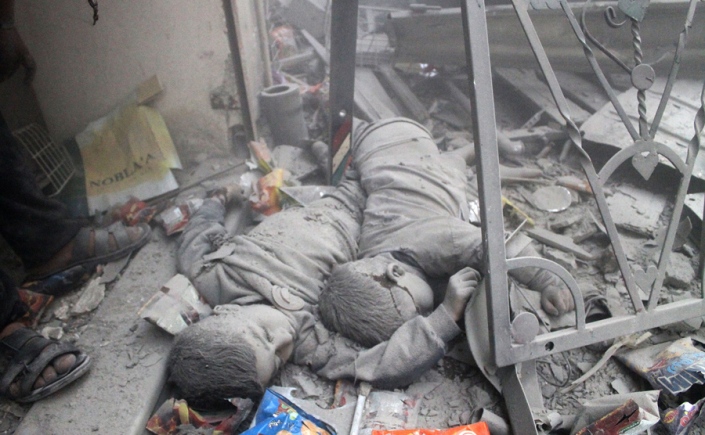 Syrian children have been subjected to “unspeakable” suffering in nearly five years of civil war, with the Government and its allies responsible for countless killings, maiming and torture, and the opposition for recruiting youngsters for combat and using terror tactics in civilian areas, according to the first United Nations report on the issue.   See:  http://www.un.org/apps/news/story.asp?NewsID=47077#.UvKrOWKSzE0

Reports and pictures out of Damascus and Aleppo of the use of barrel bombs, and sarin and chlorine gas on civilian neighbourhoods, I am reminded of Chaim Nachman Bialik’s poem, Al haShehita (On the Slaughter), about the Kishinev Pogrom in the spring of 1903:

And cursèd be he that saith: avenge this! Such vengeance for blood of babe and maiden Hath yet to be wrought by Satan.

In A Short History of The Rise and Fall Of The West, I wrote of how, in Pity The Nation, his tombstone of a book about Lebanon’s civil war, and Israel’s intervention therein, the redoubtable journalist Robert Fisk writes of a Lebanese doctor, Amal Shamaa: “I had to take the babies and put them in buckets of water to put out the flames. When I took them out half an hour after, they were still burning. Even in the mortuary, they smouldered for hours”. “Next morning”, Fisk continues, “Amal Shamaa took the tiny corpses out of the mortuary for burial. To her horror, they again burst into flames”. Such is the effect of phosphorous shells on mortals. Made in America, used on Arabs, by Jews. But it happens anywhere and everywhere, inflicted by anyone on everyone.

3 thoughts on “Bombs and Babies”