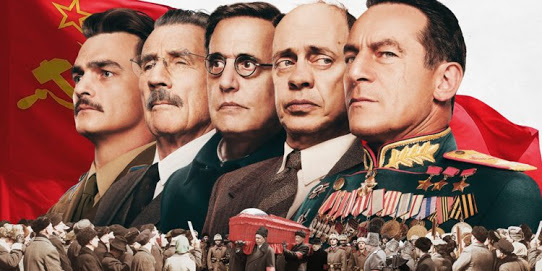 When do satire and comedy cross the line and become tasteless? Some find this black comedy hilarious, whilst others think otherwise. Many whose families lived and suffered under totalitarian regimes, and those knowledgeable of the events might have a different view to those whose knowledge and experience is limited. And those who’ve actually lived under the Soviets might display the wry gallows humour of the oppressed. As a Ukrainian friend commented: ‘I think the film is better dubbed into Russian – they really worked on the dialogue. The English version is somewhat farcical. But watching it in Russian, you want to cry and laugh at the same time (not easy to do – it takes practice)”.

In the small, beautiful Art Deco Capitol cinema in Auckland, New Zealand, we watched this blackest of black comedies: the wise-cracking, slap-sticking, foul-mouthed, Machiavellian maneuvering of the Soviet politburo on the death of venerated and feared dictator for life Joseph Stalin in 1953. The shorts promised a cinematic treat, a “comedy of terrors” replete with malice aforethought as great actors have a good time with sharp one-liners, language worthy of The Thick of It’s Malcolm Tucker (the same script-writing and production team, after all) and gags of dubious taste. The cast includes Steve Buscemi (Boardwalk Empire), Michael Palin (Monty Python) and Robert Friend (Homeland’s Peter Quinn). Critics have acclaimed it as uproarious and wickedly irreverent, and devastatingly funny (that’s the Sydney Morning Herald).

But I personally didn’t find it funny at all. A friend commented that there was little difference  between the black humour of this film and that of, say, Black Adder and Monty Python’s The Life of Brian. Quite so, but it is a matter of degree, content, the descriptions of sexual assault, and the  explicit depiction of violence. From the opening scenes, the NKVD, the all-powerful Soviet internal security service, was a constant, threatening presence. Against a predictable, seedy but picturesque backdrop of Red Square, the Kremlin and Saint Basil’s cathedral, dingy and darkened apartments, incongruously inappropriate rococo dachas, and brooding pine forests, and a soundtrack of soulful Russian music, midnight arrests, brutal interrogations and summary executions were an ongoing leitmotif for this comedy of Soviet bad manners.

The Independent reported in January this year that the film has been banned in Russia. Whilst some commentators see this as symptomatic of th state of democracy in Putin’s Russia, critics and filmmakers supportive of the ban have called it variously unpatriotic, blasphemous and unprofessional; hateful, vile and repugnant; and “insulting our national symbols. The trailer goes out using our national anthem and it shows our great war marshals as … I don’t know how else to put it … idiots.”

My primary emotion was one of sadness – for the victims, so many nameless, who perished during the Soviet Union’s two decades of terror, and for the millions – from the Baltic to ththe Crimea- who were transported to the labour camps of the distant Gulags, to work, to starve, and to die.

By strange symmetry, I had been rereading historian Robert Conquest’s tombstone of a book, The Great Terror: a relentless narrative of arrests, trials, fabricated confessions, hostage-taking, deportations, torture and executions as Stalin consolidated his rule, eliminated enemies real and imagined, and created his own model of a socialist state.

It commenced with the elimination of the Old Bolsheviks, his former comrades in arms, and then expanded to embrace all in the party and society at large who may or may not have shared his vision. Intellectuals, philosophers, writers, poets, musicians, priests, scientists, academics, teachers,  civil servants, workers and peasants, and the Red Army’s Officer Corps – a contributing factor to the Soviet Union’s need to make a pact with Nazi Germany in 1939 and its disastrously slow response to Hitlers invasion in June 1941.

An estimated death toll is difficult to determine. In those dark days, people simply disappeared, and the NKVD covered its tracks well. The official number for the “Great Purge” of 1936 to 1938 stands at 1,548,366 detained persons, of whom 681,692 were shot – an average of 1,000 executions a day. Various historians claim that the real number of victims could be twice as much.

But the the arrests, executions, and deportations commenced as early as 1930 and continued right up until Stalin’s death in 1953. Conquest, in his The Great Terror: A Reassessment does the gloomy math: 1930-36, 7 million; 1937-1938, 3 million; 1039-53, 10 million. The number of deaths in the Soviet Union that were explicitly ordered by someone – in other words, the number of executions – is actually relatively low at around 1.5 million. The majority of the deaths were caused by neglect or repressive policies – for example, those who died in the Soviet gulags, those who died while being deported, and German civilians and Prisoners of War are believed to have perished while under Soviet guard.

The numbers who were transported, exiled, displaced, and scattered to concentration camps or far-eastern towns and villages were likewise incalculable. as the brother of Boris Pasternak’s Doctor Zhivago comments in the final scenes of David Lean’s beautiful but flawed movie)

There is a myriad of books and films about these events. Wikipedia is as good a place as any to start. Robert Conquest’s is the most acclaimed – and rightly so. Then there is Arthur Koestler’s chilling novel, Darkness at Noon, published in 1940, which recounts the thoughts of an Old Bolshevik as he awaits death in the execution cells.

As for movies, there’s always David Lean’s Doctor Zhivago, which realistically albeit melodramatically portrays the choices and compromises confronting ordinary, intellectual Russians in the years of revolution and civil war. But I would highly recommend the poignant but powerful Burnt by the Sun, a 1994 film by Russian director and screenwriter Nikita Mikhailkov and Azerbaijani screenwriter Rustam Ibragimbekov. The film depicts the story of a senior officer (played by Mikhalkov) and his family during the purge of the Red Army.

On our return from New Zealand, I retrieved from my archive a paper I wrote as an undergraduate at Reading University in 1970, under the wise tutorship of eminent Sovietologist, historian and former political prisoner Tibor Szamuely, entitled How Rational Was The Great Purge?  My writing style, the content and the conclusions I drew have changed little over the years. I shall publish it soon on Into That Howling Infinite.

You were taken away at dawn. I followed you
As one does when a corpse is being removed.
Children were crying in the darkened house.
A candle flared, illuminating the Mother of God…
The cold of an icon was on your lips
A death-cold sweat on your brow –
I will never forget this; I will gather
To wail with the wives of the murdered streltsy
Inconsolably, beneath the Kremlin towers.
Anna Akhmatova, Moscow 1935

And first, English songwriter Al Stewart’s tribute to  Solzhenitsyn and those like him who were ill-paid for their service and sacrifice.

I’m coming home, I’m coming home, now you can taste it in the wind, the war is over
And I listen to the clicking of the train-wheels as we roll across the border
And now they ask me of the time that I was caught behind their lines and taken prisoner
“They only held me for a day, a lucky break, ” I say they turn and listen closer
I’ll never know, I’ll never know why I was taken from the line and all the others
To board a special train and journey deep into the heart of holy Russia
And it’s cold and damp in the transit camp, and the air is still and sullen
And the pale sun of October whispers the snow will soon be coming
And I wonder when I’ll be home again and the morning answers “Never”
And the evening sighs, and the steely Russian skies go on forever

7 thoughts on ““The Death of Stalin” is no laughing matter”