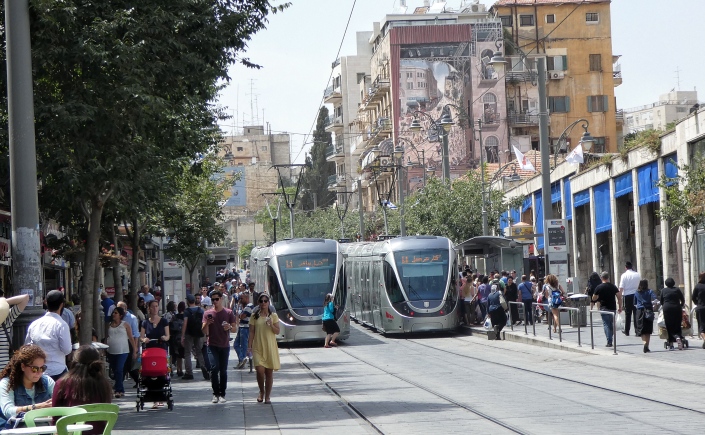 “Cause out on the edge of darkness, there rides a peace train.
Oh peace train take this country, come take me home again.”
Cat Stevens, Peace Train

Completed in 2011, the Jerusalem Light Rail unites east and west Jerusalem. This how a light rail should be – small, light, and frequent, on a traffic free Jaffa Road. It links the Jewish suburbs of west and northeast Jerusalem with the Arab suburbs of the north and east of the Old City. The featured picture shows two trains passing at Jaffa Central, underneath a neat mural that shows one weaving down Jaffa Road through vignettes of Israeli urban life. Their destinations are shown sequentially in three languages. Synchronicity determined that in the picture, both were in Arabic. 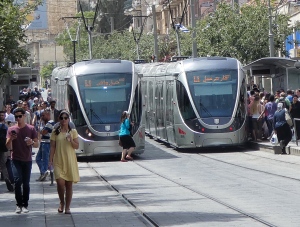 It was controversial when first mooted, and extreme elements on both sides of the conflict opposed any such normalization of relations between the Jewish and the Arab communities. There were demonstrations in European countries against the “line that divided a city”, but these petered out when polls showed that Arabs in East Jerusalem found the line to be a blessing. It got  dad to work on time; it got mom to the cornucopia that is the Mahane Yehuda fresh food markets, just four stops from the Damascus Gate; and it delivered the kids to school and back safely and punctually. It is said, with some justification, that earlier attacks on the line were perpetrated by thugs incited by Fatah, the political wing of the Palestinian Authority, which is alleged to control the taxi industry of East Jerusalem.

During the recent unrest, the line was often blocked and trains attacked during demonstrations and street fighting, but service was resumed quicksmart. Arab passengers were at times abused by Jews, and stations were the targets of random rammings by cars and heavy vehicles – the so-called “siyarah intifada” – with many Jewish casualties and “neutralized” perpetrators.

But calm appears to have descended, and folk of good will on all sides of the literal and figurative line pass in peace through Arab and Jewish Jerusalem.

“I believe that one fine day all the children of Abraham
Will lay down their swords forever in Jerusalem”
Steve Earl, Jerusalem 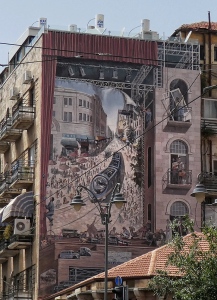 One thought on “There Rides a Peace Train”