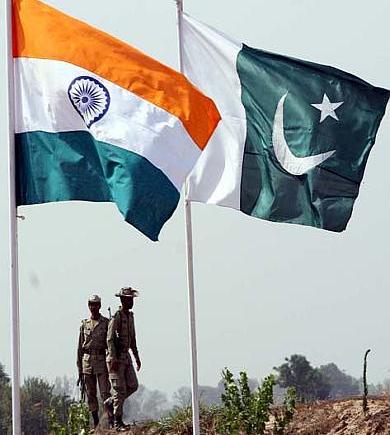 Shalimar Bagh, the beautiful Mughal Garden on the shores of Dal Lake in Srinagar. Many of us who took the old hippie trail to India washed up on houseboats on this tranquil lake high on the edge of the Himalayas. The travellers’ grapevine had rendered Dal Lake a restful and recuperative retreat on homeward, outward and onward journeys. At the time, few of us were aware of Kashmir’s mournful legacy as a betrayed and battered paradise and an intractable remnant of Britain’s rapid and reckless retreat from empire in 1947, a descent from grandeur that left later generations to sort out subsequent conflict and enmity between the nuclear-armed inheritors of Britain’s Indian Empire and the inhabitants and neighbours of what was once the mandate territory of Palestine.

Nor did we know that there were actually two Kashmirs, geographical and cultural siblings bisected by the border war that almost immediately followed partition and the demarcation line that has since then separated the ostensibly autonomous state of Jammu-Kashmir, controlled by India, with Srinagar as its capital and from also ostensibly autonomous Azad (or free) Kashmir to its west with its capital at Muzaffarabad.

The long arm of history reaches from the partition to the present, and from the present into the future. It’s icy fingers reach deeply into the politics and societies of the Raj’s successor states and the relationships, often acrimonious, sometimes toxic, and at times deadly, between them. An unsettled and volatile armed truce exists between India and Pakistan in the wake of three wars, and Kashmir, the one-time “rose of British India”, is now an inextricable thorn. Their perennially fraught relationship is compounded by the reality that they are both heavily – and nuclear – armed, and passionately nationalistic, given to bouts of high anxiety, intense emotion, and easily-aroused popular excitement – not a very good place for nuke-up powers to dwell.

Kashmir is precious to proud and precocious India and Pakistan, a place of pleasure and pilgrimage, with places holy to Muslim and Hindu, Christian and Buddhist, and a summer refuge from the heat of the dry plains below. For both, it is a potent symbol of national identity and jingoistic fervour, inevitably exploited by populist and opportunistic politicians. Jawaharlal Nehru, India’s first prime minister, was so enamoured of Kashmir that he often compared it to a beautiful woman. He was, of course, referring to Kashmir’s exquisite valleys and mountains, but Pandit Nehru also has an eye for the ladies, as Edwina Mountbatten, spouse of the last British viceroy, discovered. But Nehru’s adversary, Muhammad Ali Jinnah and his Muslim League also had passion for the place. It is part of the acronym that gives Pakistan its name. Literally, and ironically, it means “land of the pure” in Urdu, but it is a composite of what were the five north eastern regions of British India: Punjab, Afghanistan, Kashmir, Sindh and Baluchistan.

During the bloody Partition of 1947, faced with a devil’s bargain, the Hindu maharajah of predominantly Muslim Kashmir could not decide which one of the new states of India or Pakistan he would have his Muslim-majority state join. When militants entered Kashmir from newly minted Pakistan, he agreed to an accession treaty with New Delhi in return for India’s intervention to push back the Pakistani fighters. In 1948, the United Nations called for a plebiscite to be held after the region was demilitarized, to determine the province’s future status. This never happened, and Kashmir’s status remains unresolved to this day, a causus belli for three wars, many border clashes, terrorist attacks and military crackdowns. (Read a fair summary of the Kashmir conflict HERE, and of recent events, HERE )

Way back in another life, in the fall of 1971, I was present at the onset of one of those wars as hostilities were about to erupt between India and Pakistan, ostensibly over India’s belligerent response to the Pakistani army’s brutal and genocidal pogrom in East Pakistan – which in the wake of the war, become the independent Muslim state of Bangladesh. But Kashmir was where this war would be fought.

The headlights of the army trucks broke the darkness on the opposite shore as I watched from a houseboat across Lake Dal. I resolved to get out of India to what was then the relative safety of Afghanistan before the balloon went up – a thousand miles and Pakistan away. Passing through railway stations as war was about to break out, I was rushing down the line as battalions of young soldiers were heading up the line.  years late, i recalled it in the opening verse of a song (see below):

Recently, in a highly controversial and potentially inflammatory move, India unilaterally revoked the special administrative status of Jammu-Kashmir that was set in place in 1948. Prime minister Rajendra’s Modi’s Hindu nationalist government argues that special status encouraged corruption, nepotism and injustice with respect the rights of women, children, non-Muslims, Dalits (Untouchables) and tribal communities”. “Today every Indian can proudly say ‘One Nation, One Constitution’l, he declared.

Kashmiri locals and politicians fear that the unilateral move to strip the region of statehood and special protections is designed to result in demographic and social change, flooding the picturesque, fertile and under-developed valley with Hindu settlers – a potential mass migration that can be likened to Israeli settlement in The Occupied Territories, Han Chinese in Tibet, and Javanese in Indonesian West Papua. One can be sure that where migrants go, property speculators and developers, patronage and payola will follow.

Modi vows that the change will restore Kashmir to its former glory, and India’s nationalist Hindus are firmly behind him. Pakistan’s government is beating war drums, with prime minister Imran Khan declaring his country would pursue the matter “to the end”.  The Pakistani street is vowing to fight ‘to the last drop of blood” to liberate Kashmir.

Imran Khan is endeavouring to internationalize the long-standing issue, but outsiders appear to harbour serious misgivings about Pakistan’s motivations, particularly the concern that Islamabad is doing this to distract attention from its domestic failings, and ought instead be focusing  on the development of a country which stands on the verge of bankruptcy as it negotiates yet another multibillion-dollar bailout from the IMF. What Pakistan has long resisted accepting is that the country’s most serious existential threat is not India; it is internal extremists – together with inadequately developed economic opportunities. The strategic fixation of Pakistan’s military and intelligence services on the perceived threat from India has been useful to them domestically – and maddening to its friends overseas; however, it has for far too long led governmental agencies to pursue the wrong priorities.

This is not To suggest that Modi’s motives are pure nor his tactics inflammatory. India has drawn fire for its heavy-handed tactics, placing Kashmir in lockdown to pre-empt the risk of a backlash and to maintain order. But the prolonged muzzling of dissent is unedifying for the world’s largest democracy, and the sooner that media and political freedoms can be restored, and daily life normalised, the easier it will be for India to explain and defend its actions. The fundamental calculation that Prime Minister Narendra Modi has made appears to be that by fully integrating Kashmir into India he can effect a reverse “triple talaq” (Islamic divorce) by improving security, enhancing prosperity, and unifying the nation state. Furthermore, there is a serious school of Indian strategic thinking that be,Ives that Modi’s government made its move in Kashmir because it expected the Pashtun Taliban to be triumphant in Afghanistan after a potential US withdraw (aided and abetted by Pakistan’s duplicitous Inter Services Intelligence agency), and that it’s allies would tenure their attention to Kashmir. Modi is therefore consolidating Indian power in the province  and clearing the decks for action.

As with any high stakes strategy, much will depend on the quality of the execution. Whilst India’s tactics may be questioned, its strategy of equalising the rights of all its citizens is difficult to fault, whilst fireproofing against Pakistani aggression is strategically sound.

At this time of heightened tension between the two important nuclear powers of South Asia, both countries would best serve their respective citizens by following Winston Churchill’s advice that “jaw jaw is better than war war” – and then focusing on internal challenges rather than on those posed by their neighbours.

Let us hope that my lyrics remain a memento rather than a new reality.

See also in In That Howling Infinite:

“The partition of India …  is at the heart of the identity of two of the world’s most most populous nations, branded painfully and indelibly onto their consciousness by memories of almost unimaginable violence”. In That Howling Infinite.