A recent article in Newsweek noted:

“More than three-quarters of Palestinians feel their government is corrupt. Asked to name the biggest problem in society, a majority of respondents choose internal ones: poverty, unemployment, corruption and the political schism between Hamas and Fatah. Just 27 percent say the occupation is their largest concern, according to the Palestinian Center for Policy and Survey Research, the top pollster in the territories. The official unemployment rate in the West Bank is 16 percent, and roughly one in five families lives in poverty. (The actual figures are thought to be higher). Yet the streets of Ramallah are lined with billboards advertising million-shekel apartments. A tenuous middle class has loaded up on consumer debt, which soared from $1.3 billion in 2012 to $2.2 billion just three years later. All of this has served to make Palestinians more risk-averse. The way a CEO of a major bank in Ramallah sees it: “You’re not going to join an intifada when you have to make mortgage payments.”

Meanwhile, the economies of Israel and Palestine are effectively integrated. Israel controls trade The Palestinian market us captive one for Israeli products, whilst Palestinian goods have limited acess to the Israeli market. Al Jazeera has recently published an informative piece this subject.

The following is based on our own observations and knowledge, and these are informed by what we have seen and read, and what we were told by Palestinians we talked to during our travels through the West Bank. We do not profess to be experts – we are neither academics nor professional commentators. And accordingly, we welcome objective comments and contributions that both support and question our observations.

Castles Made of Sand

Whilst the attention of the international media and of NGOs is focused on Israeli settlements, there is a land rush going on in the cities of the West Bank.

A big surprise in our travels through the Occupied Territories, was the residential construction boom going on in cities fully governed by the Palestinian Authority (PA). We had been aware of this prior to coming to Israel, but not of its scale. To our knowledge, mainstream media has hardly  covered this at all, and when it does, more often than not it is PR rather than critical analysis (see links below). Our guides, for reasons of their own, were reticent about discussing it.

We often hear that development is held back by the Occupation, that buildings without official approval are subject to demolition, and that there is no land available for Palestinians to build on. Likewise, we hear about how the water supply to the Est Bank is severely restricted. Israeli settlements enjoy an abundance whist Palestinian homes endure meagre rations. Indeed, our guides would stand beneath hills covered in building sites and repeatedly tell us all this.

Most certainly, building by Palestinians is severely restricted in Area C (60% of the West Bank, and 4% of its Arab population) which is under Israeli control, and Area B, under the joint control Israel and the Palestinian Authority (22% and 41% respectively).  And water is indeed problem insofar as the aquifers are located in Israel itself, and supply is hostage  to logistical and political exingenices, and also, to an antiquated Jordanian distribution infrastructure vulnerable to regular breakdowns and leaks.

But billions of expatriate dollars are being invested in medium and high density apartment blocks in area A, the 18% of the West Bank controlled by the PA (and 55% of Palestinian Arabs) in Ramallah, the de facto capital, and in Nablus, Hebron and Jenin. It is a common practice throughout the Middle East for expatriates to remit funds to build a house or houses for their families, or to add extra storeys to the old family home (unfinished upper storeys are a familiar feature of Arab towns in the Levant). But since its establishment, the PA has actively encouraged Palestinians who have “made it” overseas to invest in their nascent homeland by repatriating their stash and putting it into the burgeoning property market. The national accounts prepared by the Palestinian Monetary Authorty show that remittances from overseas have risen steadily in recent years. But do not detail where it is ultimately invested

Where does the land available for development come from? Local commentators suggest that families sell their land to developers. There are suggestions too that speculators take advantage of Shariah inheritance laws, whereby a parcel of land or an apartment block is divided up between sons, by targeting the weakest link – the most needy for quick cash, or more easily intimidated by strong arm tactics – and then persuading the other siblings to sell. The PA is regarded by many as notoriously corrupt, and it is not unlikely that government land and land held in trust is transferred into private hands through cronyism, kickbacks and connections. And what better home for trousered cash that cannot be transferred into offshore bank accounts than bricks and mortar?

Whatever the mechanism, the slopes of the hills surrounding the larger cities are adorned with hectare after hectare of high rises. Most are works in progress, and much of those that are completed appear to be unoccupied. And, on the subject of water supply, we observed that the new buildings were not topped by the roof water tanks that are ubiquitous in most Palestinian towns and villages. No water shortages here, it would seem.

We were informed that a small apartment can cost between $60 and $100,000 before fit-out. Add another 10-20% for fixtures and fittings. Most Palestinians cannot afford these modest apartments. Those that do are in paid employment, mainly working for the PA or for UNRWA (United Nations Relief and Works Agency for Palestine Refugees in the Near East) and the many NGOs that operate here. And they raise the finance through very un-islamic mortgages. Large billboards on highways offer financial advice and funds to affluent-looking young professionals. 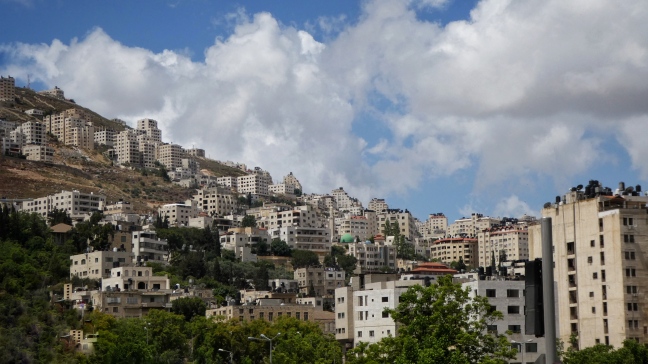 The irony is that most employed Palestinians depend upon the survival of the PA and indeed, on the continuation of the Occupation. UNWRA, the United Nations agency that caters exclusively for Palestinian refugees employs some 30,000 people, the vast majority of whom are Palestinian (only a few hundred are not), and as such, it is the largest single employer of Palestinians in Gaza and the West Bank (by comparison, the UN High Commission for Refugees employs only 5,000 to 6,000 people globally).

Should the PA collapse or be abolished, should UNWRA be dissolved, should a Palestinian state be established in the West Bank, the government, and those businesses and agencies that depend upon it for contracts and custom could become insolvent, whilst there is always the possibility that international funding could be reduced or withdrawn. In short, the housing bubble could burst, the property market collapse, and those photogenic young professionals in the billboards, and their families, could lose their jobs and their homes.

The health of the Palestinian economy is also an perennial risk factor. The economy had been improving in recent years, with unemployment in the West Bank falling and and private investment in construction growing. The two might have been working hand in hand, coinciding with commencement of the building boom. But during the past three years, economic indicators have gone backwards owing to the political and economic uncertainty, with falling rates of growth, high inflation, and continuing high rates of unemployment and poverty. Economic recession, therefore, could likewise impact on the property market.

These are worst-case scenarios. But there are other economic implications.

For example, this property boom is speculative rather than productive investment in a Palestinian economy that is heavily dependent – some would argue almost totally – on Israel and on international aid. Whilst aid donors and agencies bankroll roads and essential services like schools, power, water, and the like, some say the money should instead be invested in business startups and entrepreneurial enterprises, developing the fiscal and human capital so that Palestinians can provide for their own welfare. National self-esteem should come from being economically sustainable and not from being an indigent state.

Also, there is growing economic inequality between the haves and the have nots. Before the establishment of the PA, we were told, things were more evenly balanced. Most of the population were on a more or less equal footing. There was a sense of “we are all in it together”. Now there is a palpable sense of every man for himself.

Reiterating the forward to this post, this is based on our own observations and knowledge, and these are informed by what we have seen and read – we are neither academics nor professional commentators. But, as we sincerely desire to acquire and to present as accurate a picture as possible, we welcome objective comments and contributions that both support and question our observations. Any such insights will be incorporated into the post.

Much of what I have written is covered in this illuminating report by the Jerusalem Centre for a Public Affairs published in November 2015 (the picture gallery is an eye-opener): Luxury alongside poverty in the Palestinian Authority

Palestinian developer and billionaire Munib al Masri, so-called “Duke of Nablus” built himself a mansion atop a hill overlooking Nablus. That’s his personal mosque up there. Some locals say he could’ve built one for them in the city instead.

New high-rise buildings look down on a billboard honouring a young shahi-d or martyr.

Afterword : The Duke of Nablus and his kin

5 thoughts on “Castles Made of Sand”

Leave a Reply to O little Town of Bethlehem, how sweet… – In That Howling Infinite Cancel reply