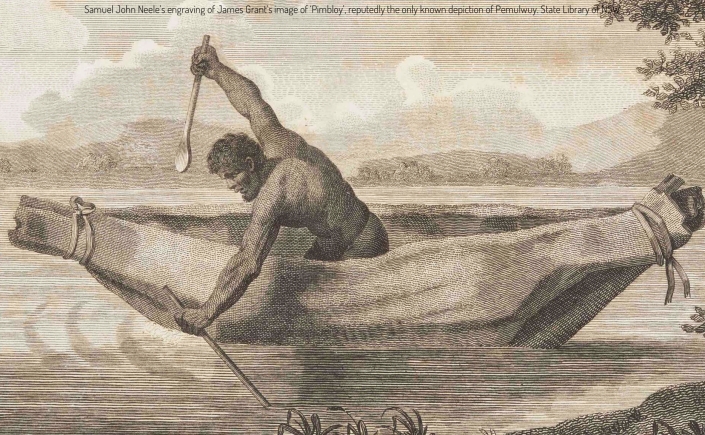 It was recently announced that Phillip Noyce, Director of the award winning Rabbit-Proof Fence, is to bring to our screens the story of Bidjigal warrior and resistance leader Pemulwuy who lived near present day Botany Bay and who united local tribes in a twelve year guerrilla war against the British invaders of what we now call New South Wales.

As is always often the case with such fearless but forlorn intifadat, Pemuluy came to a sad, bad end. Shot down in a a totally one-sided firefight, his pickled head was sent by Governor Philip King to renowned botanist Joseph Banks in England, a grisly souvenir of Britain’s self-ordained, and, to many in power, god-given, mission civilatrice.

White historical memory is like a sieve. Give it a good shake and only the big chunks are left. For a long time in Australia, the story of our frontier wars was not one of those. But in recent decades, an ever-widening crack has let the light in.

The first hairline fissures appeared in the early years of settlement as a small number of humanitarians voiced their concerns, although not with enough impetus to cool our pioneer fervour. Henry Reynolds, acclaimed historian of the frontier wars, quotes one such: ‘How is it our minds are not satisfied? What means this whispering in the bottom of our hearts?’

I touched upon this paradox in a review I wrote of historian Peter Cochrane’s novel The Making of Martin Sparrow:

“The country into which most characters venture is not, as we now acknowledge, an empty land. It was a peopled landscape, a much revered, well-loved, and worked terrain, its inhabitants possessed of deep knowledge, wisdom and respect for “country” …

… Whilst many colonists, particularly the soldiery, regard the native peoples as savages and inflict savage reprisals upon them for their resistance to white encroachment, others, in the spirit of the contemporary ‘Enlightenment’ push back against the enveloping, genocidal tide with empathy and understanding …

… “It’s the first settlers do the brutal work. Them that come later, they get to sport about in polished boots and frock-coats … revel in polite conversation, deplore the folly of ill-manners, forget the past, invent some bullshit fable. Same as what happened in America. You want to see men at their worst, you follow the frontier”. “I don’t reckon we’re the Christians … We’re the Romans. We march in, seize the land, crucify them, stringing ‘em up in trees, mutilate their parts”.

… They knew in their hearts that this ancient people and its ancient ways are helpless against the relentless tide of the white man’s mission civilatrice. “It might be that the bolters have the ripest imagination, but sooner or later, an official party will get across the mountains and find useful country, and the folk and the flag will follow, that’s the way of the world. It’s a creeping flood tide and there’s no ebb, and there’s no stopping it. No amount of … goodwill”.

No ceasefires, no parlays and no treaties

At Bellingen’s recent Readers and Writers Festival, it was our pleasure and privilege to attend a powerful “conversation” between Reynolds and indigenous activist and academic Marcia Langton (and, by fortunate serendipity, to share a meal with them at the Federal Hotel afterwards). One of many discussion points was that old conundrum: are those who rebel against authority and resist oppression and dispossession terrorists or freedom fighters? The festival event’s tight schedule precluded what was shaping up to be a very lively question time.

Australia’s frontier wars, Reynolds reminded us, raged for decades from Tasmania in our far south  to Queensland’s far north. It was a story of vicious raids and reprisals.

Australia at the time of first settlement, and particularly on the frontier, was a brutal, violent place. It was colonized by soldiers and convicts, most of them young men chock-full of testosterone and aggression, bitterness and prejudice, greed and ambition. The conflict, which in Queensland, endured  into the last decades of the 19th Century, was a war of conquest and extrajudicial killings – or more bluntly, murders. The subdued territories were patrolled  by the native police – effectively paramilitary forces.

The wars were waged by an outgunned people on the one hand, and, on the other, what were effectively robber bands raised and provisioned by the local magnates and squatters intent on seizing, holding and expanding their often enormous landholdings.

There were to be no ceasefires, no parlays and no treaties. And no recognition of indigenous rights. None were ever on offer – not that that would’ve made a difference.

Reynolds observed how we as a nation celebrate war and warriors, but do not recognize, and indeed, forget our foundational wars of martial conquest. We commenced our national journey with a declaration that our land  was terra nullius, an empty land that was “ceded and  conquered”. There is still no proper explanation at law of how sovereignty passed from the indigenous people to Britain and thence the Australian State.

Until the momentous Mabo decision of 1992 when the High Court held that the doctrine of terra nullius, which imported all laws of England to a new land, did not apply in circumstances where there were already inhabitants present – even if those inhabitants had been regarded at the time as “uncivilized”, and that as such, any indigenous land rights which had not been extinguished by subsequent grants by the Crown continued to exist in Australia. The concept of indigenous land title was thus born.

And today, at public gatherings and meetings, at carnivals and ceremonials, at conferences and conventions, many of us now recognize and acknowledge our first peoples as the traditional owners of this land and acknowledge elders past, present and future.

We have come a long way in a short time; but we’re not there yet.

There exists still a darkness at the heart of our democracy that we struggle to come to terms with; and in these divisive days, it doesn’t  take much to reignite our “history wars” as we negotiate competing narratives and debate the “black armband” and “white blindfold” versions of our national story.

Solid Rock
They were standin’ on the shore one day
Saw the white sails in the sun
Wasn’t long before they felt the sting
White man, white law, white gun
Don’t tell me that it’s justified
’cause somewhere, someone lied
And now you’re standing on olid rock
Standing on a sacred ground
Living on borrowed time
And the winds of change are blowin’ down the line

6 thoughts on “The Frontier Wars – Australia’s heart of darkness”