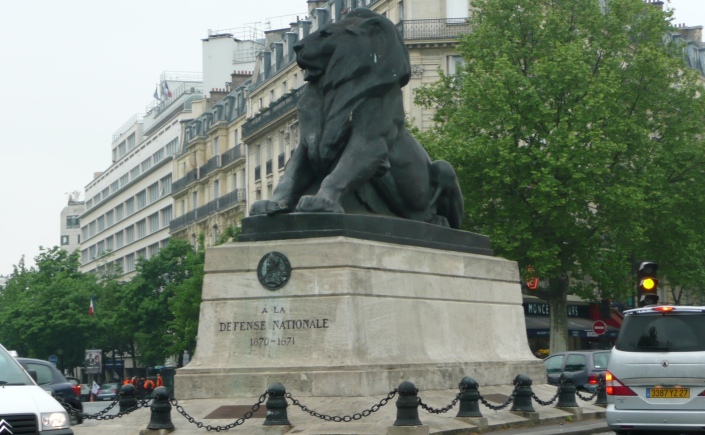 A story of exile and of exiles, of revolutions fought and betrayed, of wars and causes lost,  of faith and failure, of shame and regret, tolerance and redemption, of secrets and confidences kept and broken, of untold stories and restless ghosts.

And this winner of France’s prestigous Prix Goncourt is one of the best books I have read in years!

In Montparnasse, a metro station exits onto the wide Place Denfer-Rochereau, the centrepiece of which is a magnificent bronze lion, sculpted by Frédéric Bartholdi, creator of The Statue Of Liberty as a memorial to the heroic defence of Belfort during the Franco-Prussian Way of 1870-1871. Directly opposite is the entrance to the morbidly amazing Catacombes de Paris. On the Boulevard Raspail side of La Place is a big cafe where on a freezing, wet and windy May morning a few years back, Adele and I drank hot espresso whilst waiting for the Catacombs to open. I like to think that in the late fifties, this very cafe was indeed the Balto, where much of this magnificent novel is set:

Le Rive Gauche, as the ‘fifties gives way to the ‘sixties; as the crooners makes way for rock n’roll; as the Cold War divides a continent, sending dissidents and refugees fleeing to a safe haven in Paris; as the Algerian war divides and destroys families: and as the seeds of ‘les evenments de Mai 1968’ are sown in the hearts and souls of France’s young people

It is a coming of age book, of young hopes and fears, love and loss. It is book about writers and reading, and the magic and power of the written word in prose and poetry. Like the games of chess that punctuate the narrative, it is about how life and learning is characterized by strategy and tactics, calculated feints and moves, patience and passion. And the paradox that pervades the story: nothing happens by accident, but never underestimate the power of coincidence.

Michel Marini, our narrator, is a precocious twelve year old when we first meet him, navigating his rocky road through high school, addicted to reading, rock n’roll, playing table football in the local cafes, and his introduction to the club of the title. This gathering of argumentative, chess-playing, smoking and boozing, grumpy old émigrés become in many ways a surrogate family. Michel first encounters these outcasts of Eastern Europe in the back room of a bistro. They are The Incorrigible Optimists Club, where,  despite the ancient discord of its members, the club serves as thier sanctuary. “The Poles hated the Russians, who in turn loathed them; the Bulgarians detested the Hungarians, who ignored them; the Germans abhorred the Czechs, who despised the Romanians, who could not care a damn. Here, they were all stateless and equals in adversity.”

Lost souls, the flotsam Old Europe, hugging their faded and vanished dreams, their language, their culture, their sad and often traumatic memories of their past in a strange land. Men without women, stateless, penniless, jobless, homeless, dispossessed of their wives and children.  Bent, but not broken. These are memorable characters, each with his own colourful and poignant back story. The pilot who defects for love, the doctor who drives cabs because his qualifications are not recognised. The Hungarian movie idol and his enamoured agent. The mysterious photography expert who befriends and mentors the young narrator. They are trapped between worlds and irreconcilable desires: “When a man achieves his dream, there is neither reason, nor failure, nor victory. What is most important in the Promised Land is not the land, but the promise.”

And there is also Michel’s actual family, his mismatched, over-worked and out- of- time parents, each from a different class and station, and their parents and siblings, particularly Michel’s art-loving Italian grandfather, and his dislocated pied-noir uncle and cousins. His chatterbox little sister, and his tortured, intellectual brother Franck. And front and centre in Michel’s adolescent life, Franck’s girlfriend and her would-be-revolutionary brother, beautiful, intelligent, rebellious, orphaned rich kids who become young Michel’s muses: and literally colliding with him through serendipity and synchronicity, his first true love. And behind them all, casting ominous shadows and unleashing sundering storms, lurks the dangerous backdrop of the closing years of the bitter and bloody Algerian independence war.

A knowledge of the Russian Revolution and its dramatis personae, Stalin’s Terror, The Great Patriotic War, the Hungarian Revolution and the building of the Berlin Wall, and of the ‘savage war of peace’ that was Algeria, is not obligatory, but it certainly helps set the scene for the various stories and vignettes that unfold. Cameo roles include philosopher Jean Paul Sartre, novelist Joseph Kessell, and one Rudolf Khametovich Nureyev – and the sinister ghost at the feast, Iosif Vissarionovich Stalin.

Every now and then, your jaw drops and you say to yourself “this is a masterpiece”! Like when I first heard Keith Jarrett’s Koln Concert and Glen Hansard and Markéta Irglová’s The Swell Season. Sultans of Swing and The Boy in the Bubble. When I first read the opening paragraphs of Catch 22, and Chapter 41 of Moby Dick. The Incorrigible Optimists Club cast the same spell.

I leave the last words to the author: “Before you read a book, you can know immediately whether or not you are going to like it, just as with people, you can tell just from looking at them whether or not you’ll be their friend. You smell it, you sniff it, you wonder whether it’s worth spending time in its company. The pages of a book have an invisible alchemy that imprints itself on our brain. A book is a living creature”.

You cannot find a better testimonial for the printed word than that.

9 thoughts on “The Incorrigible Optimists Club”